As you can see there haven't been any posts for a while, which is a real pity since Wally and Vicki did such a fantastic job setting it up! As always the group is ever changing with people moving away and moving on and new people joining us and either deciding its not for them or (as we hope) coming back to work with us again. Then there are new members who are born into Makanyanes - like Charlee-Rose, Wally and Vicki's adorable little angel who is not afraid to get dirty 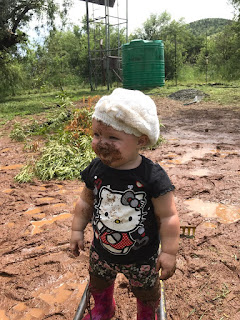 There is always a lot of work needed in the park and we try to keep up as well as we are able, some jobs are ongoing such as maintenance in the Boma and others we do manage to wrap up!  There is no feeling like being able to FINISH a project. It is wonderful to be back in the Boma again since October 2016, we are happy that the poaching survivor, Ike, has moved to Hoedspruit where he has been introduced to other dehorned rhinos and even has a lady friend, we wish him the best with his new family 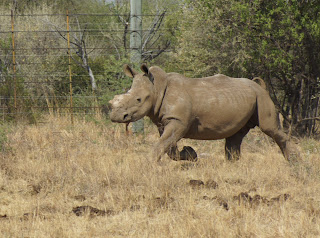 So far in 2017 one of the big projects we had was replacing the fence at Fela Garona which was removed by an elephant on two sides. The team put new droppers in and threaded a 12 strand electric fence all the way around which is working very well and the HO's can stay safely there again. We had an extra work party in January to get the job done. 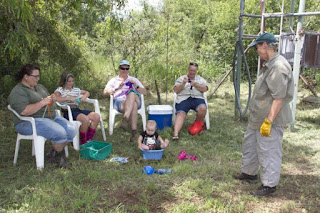 The ladies took some time out to work on blankets for the Blankets for Baby Rhinos group on Facebook.  The blankets go to rhino orphanages to keep the babies warm, since their moms aren't around due to poaching.
The MV ladies have been working with Perry Dell and the Pilanesberg Wildlife Trust (PWT) over the last year selling merchandise and  "Shots for Rhinos" at Pilanesberg Centre. Among other things the PWT has bought a Bathawk, a two seater light aircraft, along with Copenhagen Zoo, to fly patrols over the park. The Makanyanes have helped raise over R68 000 so far in 2017 and we are always happy when Perry or her very able assistant, Cathy, join us on a Saturday morning for sales and a "melktertjie"!
Another project that we have been tackling is erecting a carport at Steve and Perry Dell's house for the rhino trailer which is used to transport rhino orphans to The Rhino Orphanage. Initial preparation was started in December but a team went in again this month to try and get the job done! They did great work and managed to get most of the work done over two days, including innovative methods of concrete mixing. Well done, guys, the roof can be done next month!

Keep well, everyone.  Hope to see you soon!
﻿

﻿
Posted by Makanyane Barker at 11:26 No comments: Posted by Makanyane Barker at 07:56 No comments:

“You know you are truly alive when you’re living among lions.”
― Karen Blixen, Out of Africa

This weekend we had a large workparty which is good as we had some hectic tasks ahead of us!!

Friday night we all sat around the fire wrapped up in our jumpers and jackets and braced ourselves for a chilly night - winter is not far away now!!

Saturday morning we all woke up bright and early with steaming hot coffee in our hands a chill in the air and a big birthday wish to Margaret we all headed off to the boma. We split up into groups Nando's team attacked the weeds around the fence with style, Pat and Mona had a group of us helping them whilst they created master pieces with brick work wahooo it was awesome although Jax did introduce me to utilising cement as a homemade facial!! lol!! Graham and Wally headed off to work on the fence itself, Kori and Freddy made it their mission to break through a concrete man hole - dedication i tell you and Ed, Brian and crew worked on the fence gate. All in all it kept us all busy busy busy and time flew by!

That night we all sat around the potjie pot filled fire and went through our highs and lows. Scrummy cake was supplied by Margaret and Diane and as per normal lots giggles and laughs were had!

Ahhh another fantastic Makanyane weekend thank you so much everyone.
See you next month!! Don't forget to pack those extra woollies!!
xx 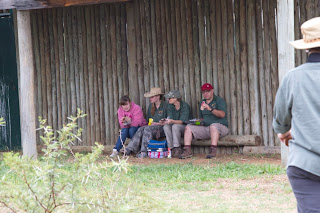 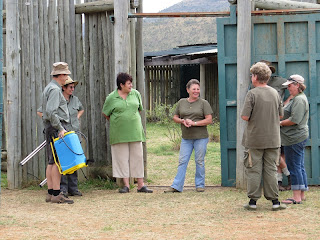 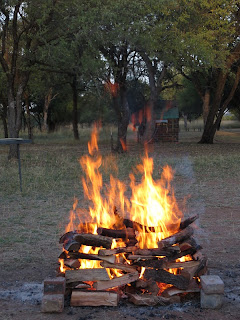 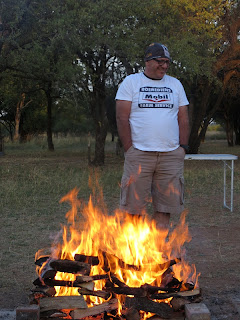 Posted by Makanyane Barker at 09:54 No comments:

We are the Makanyane Volunteers! Our mission is to help the Northwest Park and Tourism board in its conservation of wild plants, animals and landscapes for the benefit of the people who have interest in the environments and wildlife and appreciate more the “wide open spaces”.